If you are studying Kubernetes and having a hard time running Minikube on an EC2 Instance, you are not alone. I had a hard time doing it when it was my first time.

Below are the steps (and some comments) that I took to help me run Minikube on my EC2 Instance.

Installation of Minikube on EC2 Ubuntu

1. Run a public EC2 Server with the following setup

Update: I changed the Instance Type from t2.micro (1 vCPU) to t3.micro (2 vCPU). An update to Minikube required a minimum of 2 vCPUs. The error when running with t2.micro was Requested cpu count 1 is less than the minimum allowed of 2.

t3.micro is no longer in the Free Tier, make sure to stop or terminate the instance after you are done testing to avoid a huge AWS bill.

Thank you to everyone in the comments section who pointed this change.

2. SSH into your created EC2 Instance using your keypair.

We have now successfully installed Minikube!

If you are not comfortable running commands as root, you must always add sudo before the commands minikube and kubectl.

Do not worry about the warning. As long as you see the message ‘Kubectl is now configured to use the cluster.’ you have successfully ran Minikube.

Note: In the Install Minikube documentation from Kubernetes.io it says that you need to enable virtualization by accessing the computer’s BIOS. For EC2 Instances we do not have access to the BIOS since AWS EC2 instance is a Virtual Machine. Thus we are using the --vm-driver=none tag. No need to install a Hypervisor (VirtualBox or KVM)

3. Check the status of Minikube

If you see the status as ‘running’ then we can now run kubectl commands.

4. Let us run our first container

5. Expose the container ports so that we can access it.

6. Find where port 8080 in container exposed in EC2 Instance port.

The EC2 Instance Port changes each time you expose a port, you may have been given a different value than what I have.

kubectl get services command shows the list of services and their exposed ports.

Let us check by accessing this via a web browser on our local computer. But first we need to edit our EC2 Security Group.

7. Edit Security Group of the EC2 Instance to be access

The goal is for us to be able to access the EC2 Instance Port (30263 for me) via the internet.

8. Access the our container via the EC2 Instance Port on a web browser. 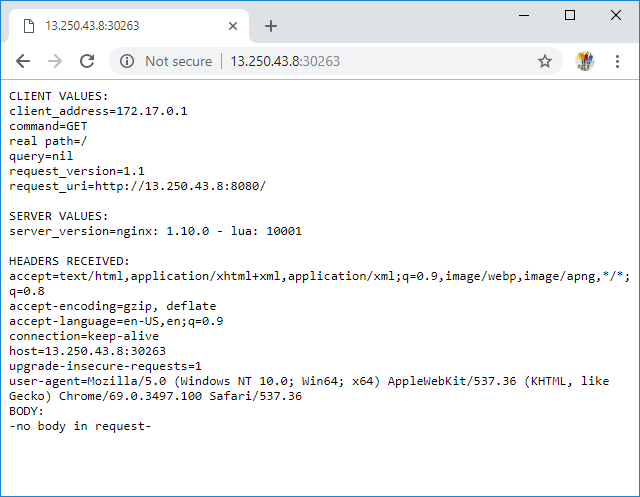 See the request_uri of the page displayed by the web browser, it says that I am accessing via port 8080.

I accessed my container deployment using Chrome on my laptop. You can use any web browser you like (Safari, Internet Explorer, Edge, Firefox, etc.)

Now that we know that we can access our container, let us finish this and clean up.

Stopping Minikube/Shutting Down the Cluster

I hope the above helps when you want to use Minikube on EC2 Ubuntu.

If there are errors, comments, suggestions, or clarifications you can comment them below.